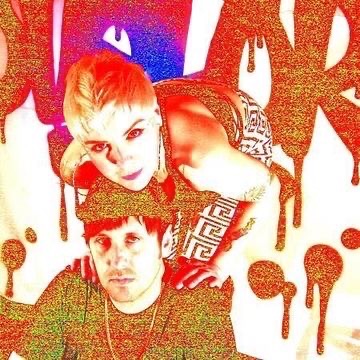 I first met Anna and Patrick back in 2015 at The Ottobar in Baltimore, Maryland. Their band at the time, Creepoid, was opening for Swirlies; we were doing 3 shows together. During that time, I was able to get to know them a bit and establish a connection. Familiar faces in unfamiliar places. In 2016 I was able to get Creepoid to come to VB and play with You’re Jovian. Shortly thereafter, Creepoid would announce they were breaking up, and from those ashes, Anna and Pat formed Lovelorn.

Over the past few years, you might’ve caught Lovelorn in Norfolk at Toast or Charlie’s. Now they’re playing in Richmond at Wonderland with True Body on Sunday, March 1st and then in Norfolk at Taphouse on Monday, March 2nd with buds, Arms Bizarre. They also just released a new single that demonstrates the band departing from the previous sound of their former band. If you’re a fan of darkwave, post-punk indie rock goodness, then you don’t wanna sleep on this. I recently caught up with Anna and Patrick and asked them some questions, enjoy!

How soon was it before you and Pat decided to start another band coming out of the fallout of Creepoid?

Patrick, Pete, and I started casually playing together about six months after Creepoid ended. Patrick and I had just moved into a new house, with a practice space, and I think it was this shift away from where Creepoid had played that helped initiate things. It wasn’t until about two months after that we really started thinking of it as a ‘band’ and writing songs.

You already had great rapport with fans, promoters, and venues through Creepoid. Was it pretty easy to build Lovelorn and get started because of this?

It really wasn’t super easy. Lovelorn is a completely different project, and we had to start over in lots of ways. Although we had some carry-over fans from Creepoid, we’ve had to put the work in to build up that base with Lovelorn. Once we have an album out, hopefully, it will get easier.

When did the music for Lovelorn start to take shape? Because it seemed like a seamless transition. To me, you all already had songs and a tour booked with what felt like a week after Creepoid disbanded. Of course I’m exaggerating, but still…it was quick.

It *seemed* quick, but that was only because Creepoid had ended long before we announced the final show. It was during that in-between time that Lovelorn formed, but we decided not to announce the new project until after our final Creepoid show.

Creepoid, to me, was a darker sludgier shoegaze band, whereas Lovelorn kinda had that to start but now has started exploring more of this European type house trance music mixed with some post-punk goth vibes. Is this a fair assessment or way to describe Lovelorn to someone who’s never heard of you all?

I would say…yes, fair. But I often describe Lovelorn as what James Murphy would sound like if he grew up in Philly and had to sweat his rent every month : ) We definitely took some time to shake off the familiar, but I think [ ] we’ve fully embraced being whatever Lovelorn is, as opposed to following old habits.

Anna, what was the initial transition like going from a bass player/singer with a live/organic band behind you to now being front and center with backing tracks providing the music? One might say that backing tracks, as reliable as they are, can lack drive and liveliness versus a band which can provide a lot of energy and be somewhat different night to night. Which do you prefer? It seems like you’ve fully embraced being the front person of Lovelorn.

I always thought of myself more of a performer than a ‘bass player’ or ‘singer.’ So, it’s easy to transition to a position that relies more heavily on being performative all the time. It was harder to transition to playing to a track for sure! Creepoid was always more…let’s say…organic in how songs were played night to night. But, I wouldn’t say that our set up lacks any drive or liveliness at all. Patrick and I each do things that allow us to be flexible and creative within the structure, and that’s important to us.

You all always use the hashtag #bringweed. How often do people actually bring weed, and do you all actually smoke strangers’ weed?

Necessity is the mother of invention, and when you tour the way Creepoid did, we needed weed in a different city every night lol. We started using it in 2015, and I would venture to say there have been very few shows we played since then that people have *not* brought weed…along with other treats. No one is a stranger once they share drugs with you.

Between Creepoid and Lovelorn, have there been any close encounters with the police on the road, especially when traveling with so much weed?

Don’t want to say too much here…but yeah, please kids…don’t drive with a lot of drugs.

You all are coming through en route to SXSW. Is SXSW still worth it for independent bands? It seems that indie bands put a lot of emphasis into SXSW and front a lot of money just to get out there and play 2 showcases. Is the greater idea of SXSW dead? What should younger or less seasoned indie bands expect from playing at SXSW?

Yes and No. I mean, if you go into SXSW thinking this is going to be your big break and catapult you into instant fame and success…then you are going to be disappointed for sure. But, if you go into it thinking you’re gonna see your friends/peers, eat some good food and play some good shows, you’re going to enjoy it much more. Creepoid definitely benefited greatly from playing SXSW, but it often took months to years for those benefits to be realized. So, just have fun, be patient, and tour as much as you possib[ly] can.

Any showcase(s) you’re looking most forward to?

Pat, I heard a rumor that someone once punched you in the face in Texas because they thought you were Nicky from Nothing. Did this actually happen?

Can confirm this did happen, but in Brooklyn.

Pat, you set up shows in Philly. As someone who plays in a touring indie band and books bands, what is your biggest pet peeve that other bands do when trying to book through you? Also, has lessons learned throughout show booking helped you personally book Lovelorn shows?

I’ve been booking shows for 15 plus years, so I have lots of pet peeves. [The] biggest has to be bands that aren’t willing to do their own promotion and expect the venue to do everything. It’s a team effort. I also get a real kick out of bands that complain to me about parking. My job absolutely helps me to book my own projects. I know the email etiquette (keep it short, be specific, and include a link (not 10)). I’m down to do whatever I can to make the promoter’s job easier – internal promotion, researching local bands, etc.

In 2015, Creepoid played 3 shows with Swirlies starting at Ottobar in Baltimore. How did that come to fruition? What do you remember from those short run of shows together?

Our booking agent at the time set that one up. 2 memories come to mind – the first is Sean Miller teaching them how to set up their pedalboards, which they bought on that tour. Second, the last night of that tour was in Chapel Hill, North Carolina, and we totally slayed. Really great set. Finished out the night partying with homies we have there. Very late/early morning, we got the notification of our long-awaited Pitchfork review of Cemetery High Rise Slum, and they TRASHED it. I remember thinking, “I’m glad we’re all real fucked up, or this would be a big bummer.”

Lovelorn has an interesting set up for only being a two-piece. Do sound people give you any flack for the way you go about your set up? I personally like that you keep the ability to mix the backing tracks up to you, the band, and not the venue sound person.

Sound people are actually usually pretty stoked on our set up. Every now and then, we’ve had a real square that’s just totally confused that we don’t have a guitar player, but the professionals are chill. I think they appreciate that we understand our equipment and are trying to have as much control over it [as] we can.

Philly is quite honestly one of the best cities. If you had to live anywhere else in the country and base Lovelorn out of it, where would that be?

Philly is the best city for sure. Nowhere else really feels like home. But we also love LA and Austin. [] If we move anytime in the near future, it would be to either of these cities.

Last question. I myself am a NASCAR fan. I often feel at odds with myself for being a musician and a sports fan. I feel that I get cast into this imaginary shoegaze culture of adoring all things beauty and being constantly artistic. It’s almost like this constant push and pull of being a jock and a musician. Some people don’t take me as serious for enjoying my sport of choice…I know that both of you are Eagles fans. I feel that in the indie scene, it’s almost a joke to some people to be an avid sports fan but also be a musician–especially to all the art kids out there. How do you feel about this? You notice it too?

I think that it’s less of an issue here in Philly because our sports teams are so pervasive in all parts of our culture–including music. Have you seen Silver Linings Playbook lol? In the Philly music scene, tons of musicians rep their team, whether that be Sixers, Eagles, whatever. That being said, I do know [a] ton of people that absolutely are not into sports and people into sports that aren’t into music–but not really too much animosity between the two worlds. What’s more of an *issue* is when you tour with a band from another city that’s equally passionate about their team…especially during football season : )

Go listen to the brand new Lovelorn single, “Around You,” and check them out on their spring tour, see dates below.

𝙀𝙭𝙥𝙡𝙤𝙧𝙞𝙣𝙜 𝙇𝙞𝙛𝙚’𝙨 𝘾𝙤𝙢𝙥𝙡𝙚𝙭𝙞𝙩𝙞𝙚𝙨 𝙞𝙣 𝙁𝙤𝙧𝙚𝙞𝙜𝙣 𝘾𝙤𝙡𝙤𝙪𝙧’𝙨 𝘿𝙚𝙗𝙪𝙩 𝘼𝙡𝙗𝙪𝙢, 𝙒𝙚𝙞𝙜𝙝𝙩 𝙤𝙛 𝙖 𝙍𝙤𝙨𝙚 - Peak fall vibes are here and along with it comes @foreigncolourva’s latest release (and debut album), Weight of a Rose.
𝙏𝙝𝙚 𝙅𝙤𝙪𝙧𝙣𝙚𝙮 𝙩𝙤 𝙁𝙞𝙣𝙙𝙞𝙣𝙜 𝙋𝙚𝙖𝙘𝙚 𝙞𝙣 𝙎𝙝𝙖𝙤𝙡𝙞𝙣𝙣’𝙨 𝘽𝙡𝙖𝙘𝙠𝙨𝙩𝙤𝙣𝙚
#TBT #ThrowbackThursday to Laurence Fishburne as Cowboy Curtis in Pee Wee’s Playhouse #yeehaw 🤠
We may have gotten some really super cool official POPSCURE merch for the really super cool @smartmouthbeer ☀️Juneteenth Festival☀️ happening this SATURDAY. Ya know…just in case you needed a little extra incentive to stop on by and have a good time 😉
THIS IS GONNA BE ONE FOR THE BOOKS 😎 COME GET HOT WITH US 🥵
We’re back with another round of amazing AAPI artists, this time with a special highlight on the wonderfully talented Ellen O. While Ellen is no longer with us, it doesn’t mean we can’t appreciate her musical contributions to this world. The singer/songwriter and multi-instrumentalist had a sound that was beautifully dark and mesmerizing. The Brooklyn-based artist uniquely crafted her songs to incorporate her classical piano background and love for hip-hop and trap music/beats. You can watch her Popscure Presents set/interview at the link in our bio. ❤️ Songs to know: “Sparrows & Doves,” “odd,” and “chicago”
Loading Comments...